When I first read about The Banner Saga all I really learned is that it brought together amazing artwork and Vikings. Development team ‘Stoic’ raised over $700,000 through Kickstarter in 2012 to bring this experience to you, but you’re going to have to earn it and become a true leader.

Thanks to Stoic we received an advanced copy of The Banner Saga for review. After playing through the preview we’ve only just scratched the surface and are assured that there is another ¾ of the game to come.

Also I might not have been as terrible at the combat had I played some of the Multiplayer (The Banner Saga: Factions) that was released on Steam back in February. I’m sure there will be a number of comparisons to Oregon Trail, having grown up in Australia; Oregon Trail wasn’t really a big thing here so let’s ignore that.

Now that the introductions and fair play announcements are out-of-the-way, we can begin with The Banner Saga Review.

The first thing you’ll notice about The Banner Saga is the artwork, it’s ok, everyone usually needs to take a moment. In a world of white snow and grey rock Stoic bring to life hand painted colour that hasn’t been seen before. From the zoomed out view watching your caravan make its way to the combat and cut-scenes, The Banner Saga looks great.

The music brings to mind folklore tales and epic journeys which is probably intentional because the end of the world is coming and it’s time to get moving.

The game throws you into the thick of it fairly quickly with the new characters you’re meeting for the first time seemingly know each other from previous adventures. We’re first introduced to the Varl, big guys with horns and contempt for the Human race, not really hostility but like most fantasy the humans are hot-headed and immature compared to their larger, longer-living cousins.

The dialogue between the characters is special and brings out their personalities. This is important because you quickly have to keep track of a number of different ‘Heroes’. Here I would have liked some more voice acting, this was just a preview code and perhaps all of that isn’t finished yet. Maybe I’m’m just spoilt with games like Skyrim where gruff men tell me how I would make a good rug. 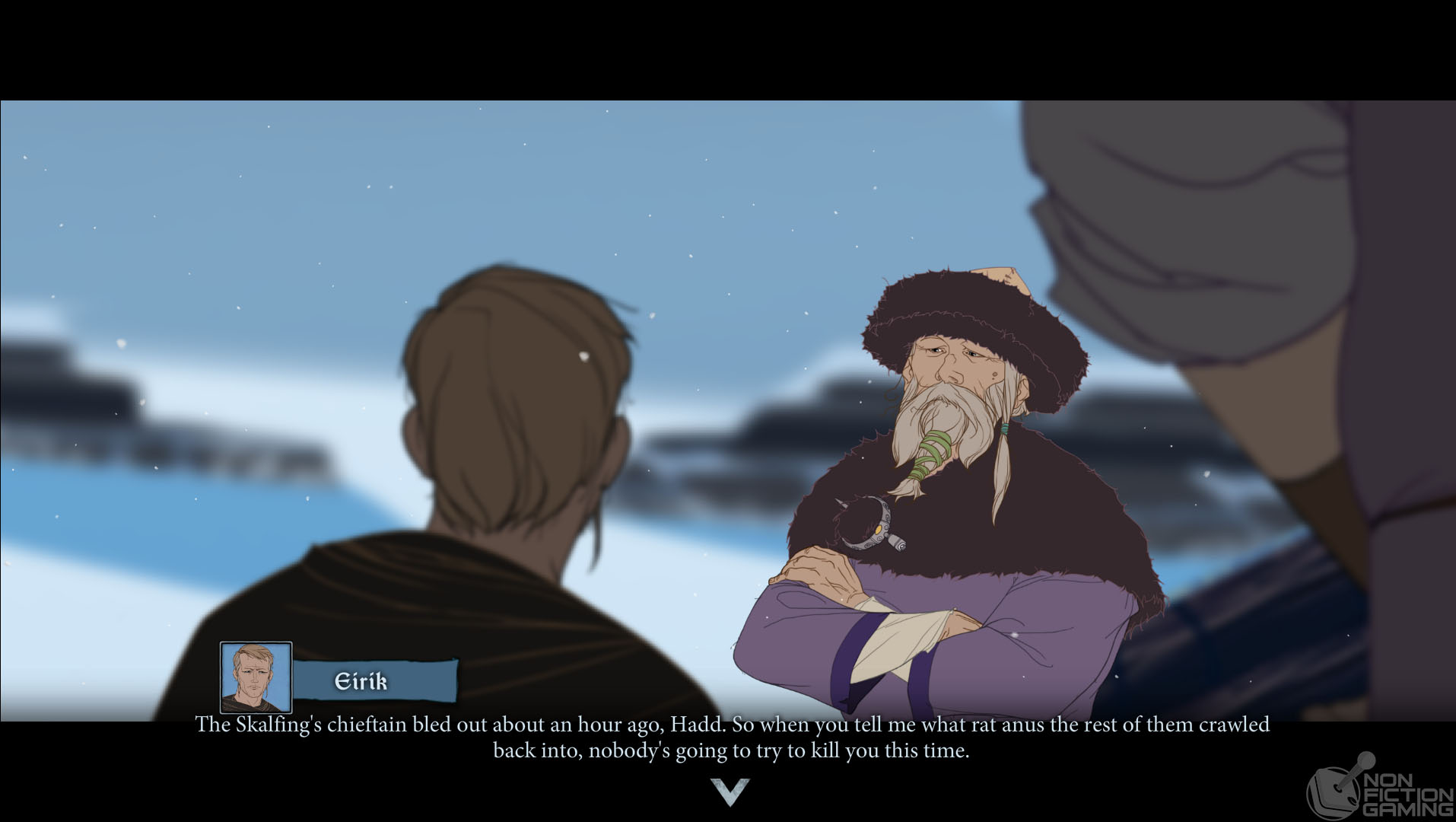 Through combat and choices you’ll accrue renown, this is the in-game currency used for buying items, levelling up characters and trading for supplies.

After you’ve settled in and learned the how the isometric turn based combat works the game really begins. It’s easy to think at first glance that this game is about the combat, most games are. In The Banner Saga though the real role of a leader is managing a group of people and keeping most of them alive. You’re thrust into the role of leader whether you like it or not. As the Varl in charge you need to make the tough calls.

Each decision I had to make gave me pause, there seemed like no ‘correct’ or ‘good’ choice. No matter what you do, someone is probably going to be unhappy. I needed to show my Varl soldiers that I was as strong and wise as our previous leader, I needed to keep a spoiled human prince happy to preserve an alliance, I needed to keep our supplies at good levels as we trekked across the snow-covered mountains, I needed to do this, and I needed to do that…

Some of these needs outcomes are mutually exclusive. When faced with the prospect of sending out a war band to rescue some villagers, I had to weigh the cost. Will our supplies hold with the increased mouths to feed and will my soldiers even stand a chance against the Dredge? Characters I came to respect and rely on in battle would leave me when I didn’t align with their morals.

The developers are going for an interactive Game of Thrones style of storytelling here. Here are some characters, love them or hate them you will grow to care and maybe even respect them. Then they are stolen from you by the never-ending sleep of death because of a choice you made. But you don’t even have time to dig a grave because you must press on.

Another similarity to Game of Thrones is how the location and focus of the story shifts back and forth between different characters. Hakon and his large war band of Varl and Humans carry the green banner on their mission, struggling more with Varl-human relations and vast legions of Dredge. Rook and Alette only have one Varl, Iver with them and are lead fleeing peasants away from a threatened homeland partaking in smaller skirmishes and a lack of supplies.

As a leader when your massed force is ready to bear down on an unrelenting wall of Dredge you need to choose how the battle goes down. If your army outnumbers your foe then maybe you can look to lead from the rear, but what happens when you’re hugely outnumbered? You can choose to charge into battle with your party of heroes in order to take pressure off your caravan. Now you’ve set yourself up with a tougher combat to save your peasants and soldiers.

The Turn Based Combat

I mentioned before that this game isn’t really about the combat. It is and it isn’t. The combat is fun once you get the hang of it. After first realising I wasn’t really cut out to make tough decisions in this brutal world I started realising I may not be the best with tactics either. Now I’d like to get some perspective on this because I found it hard to keep all my heroes alive in each battle.

There isn’t perma-death for these Varl and Humans in these battles but they do become injured and need to rest. Resting for a day or two could mean running out of supplies and the caravan going hungry, or worse.

Varl take up a bit more space and can hit hard. These battle hardened warriors can take a fair bit of pain, especially the shield bearers. You alternate turns with the enemy force until one of you only has one unit left. This was an interesting choice in combat style.

Having more units up means your heroes have longer between each turn, yet you have more people to absorb blows or keep fighting. It forces you to think ahead about whom to attack because that big Dredge’s turn is coming up again soon and he’s about to K.O your archer.

The Dredge look like infernal golems and come on relentlessly, they come in both Human and Varl sizes. The ever-present threat of giant armoured creatures that don’t rest follows you throughout the vast world of The Banner Saga. If you find the combat easier than I did, you’ll have the option to take on more foes without any rest, increasing potential renown but risking further injuries.

Without knowing what to expect going into this game I’m impressed with what Stoic have so far. It’s so different from other party/army management games where there is usually a way to keep everyone happy. I’m sure this will lead to an explosion of guides and walkthroughs, even then though I don’t think there is any correct path.

There are still some things I would love to see more of such as more animation and voice acting. However I have to remember this is a small Indie Developer who raised money on Kickstarter to make this happen.

I personally can’t wait for the release of the full version of The Banner Saga in 2014. If you are looking for a game that will have you make choices of life and death for your friends, you can’t go past this. There is no room for softness in a world where the sun never sets, the wind chills to the bone and the Dredge’s glowing eyes follow your every step.

I look forward to the songs the bards will sing of ye.

The Banner Saga will be available for PC through Steam and DRM-free digital distribution early next year. Ports are planned for Linux, iPad, Playstation Network and Xbox Live Arcade.

Daniel Ryanhttps://www.nonfictiongaming.com/author/nfgdan/
Daniel 'Sheriff Dan' Ryan is a long time Dungeon Master who has worked in Esports, Marketing, and writes about Gaming when the sun goes down.
RELATED ARTICLES
Guides