Lately, there has been news of a second Outlast. Slated for release this year, it’s a pretty exciting concept.

Readers of Non-Fiction Gaming will know that I’ve been pretty tough on Outlast. The horror game was released to rave reviews and impressive word of mouth back in 2014. But somehow, for me, it came up short.

I’ve used it as a frame of reference for Alien Isolation and seen only the worst – an unpopular opinion, I assure you.

Why, then, am I so keen to see the release of Outlast 2? Well, it all boils down to a very short piece found at the end of the original game: Whistleblower.

Whistleblower is additional content available for purchase that explores more of the story surrounding the events of the game. And it is outstanding. More than any other game I’ve played in the last year, Whistleblower gets so much right and it’s tough to find a way to fault it.

The World is Expertly Crafted

This is possibly the biggest win for Whistleblower. The characters, the way the game develops, the setting, even outside of the narrative, are all impeccable.

Whistleblower has players take on the role of Waylon Park – a software engineer who works for the company responsible for the events of the primary game. Having a strike of conscience, he emails Miles Upshur, the protagonist from Outlast, gets caught, experimented on, and has to wander the asylum to find a way out.

Waylon’s adventures take him to different areas within the complex, such as the cafeteria, prison, and recreational wing. Each location has a new primary antagonist.

In the beginning, players must avoid the Walrider, a rather unconvincing phantom. As they proceed, they’ll run into the Cannibal, the Brute from the previous game, and the Groom. More on these later.

That the Walrider makes an appearance early is a blessing in disguise. Unlike Outlast, which is cemented in reality for most of the game before its acid trip of a finale, Whistleblower has the ghost make a token appearance and then abandons it for the rest of the story. I cannot tell you how much I appreciate that and what a difference it made.

Whistleblower sports two primary antagonists: the Cannibal and the Groom. Chris Walker, the behemoth from the first game, appears briefly. These two enemies are the strength of the game. They provide variety and are genuinely creepy but for different reasons.

The Cannibal is a patron in the cafeteria. Except this cafeteria is now his meals preparation area. Players encounter him after crawling under a table in the mess hall, catching a glimpse through the window of him slicing and dicing a fellow inmate. He is erratic and his movements and associated jump scares all showcase this.

Often appearing by crashing through doors near the player, he is the bombastic and intense enemy that really gears players up for the game.

This enemy is easily discernible by his trademark saw. A buzzing, whirling saw blade is a sure sign that the Cannibal is on his way. Whistleblower knows this and will eagerly play the sound around every corner once you have been conditioned to respond in fear. He is loud, shouting at the player about all the charming things he wants to do.

The Groom, on the other hand, is possibly the best horror character I’ve seen. In stark contrast to the Cannibal, the Groom primarily speaks in calm tones. His appearance is foreshadowed by a note found in a shed in the courtyard: 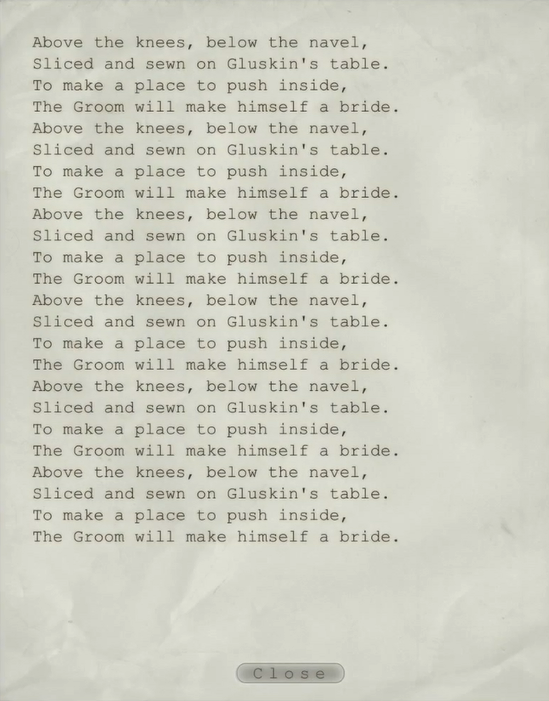 Eddie Gluskin, the Groom, shows up shortly after. Frequently, he pokes his head through glass in doors after Waylon tries (unsuccessfully) to open them. He is smiling along and speaks sweet nothings to the player as the Groom searches for him.

Until, of course, you attempt to escape. Once he thinks you don’t want to be his bride, Eddie will shout vicious slurs and all manner of horrible language to vent his rage.

Like the note suggests, Gluskin’s goal is to craft himself a bride; with the only problem being he’s in a male-only ward. At some point, the player is captured by the Groom and comes very, very close to becoming the bride: a table saw being used to form the genitalia and some incisions make in the chest that will be filled with the guts from a previous victim to make breasts. In true fashion, one of these experiments is on display just before Gluskin appears.

Gluskin is an undoubtedly creepy character. He lashes out, injuring the player, before apologising and professing his love.

Never mind the horrific experimentation. Never mind the table saw and bodies hanging from the ceiling (of which there are a lot). His unpredictability makes him dangerous; and the disconnect between what he’s saying and what he’s doing puts players on edge. Also his tendency to pop up, smiling joyfully, is somewhat unnerving.

Where the Cannibal crashes through the doors, swinging his saw, the Groom politely asks you to calm down and matter-of-factly finds his way into the room.

It seems unusual to think a short game is a good thing. Horror games, however, tend to last a little longer than expected. A little bit of content goes a long way when the player is crawling everywhere and hiding to avoid detection.

All up, Whistleblower lasts about two or so hours of plodding along. Longer if you’re cautious or frightened.

This is an advantage, though, because of the way Outlast works, a lengthy, protracted game becomes tedious. My complaints at the time centred on this: because one enemy with the ability to instantly kill you patrols a small area, it forces the player to make slower, more calculated moves. These behaviours extend the game and limit exposure to new stimuli.

By the time players are getting tired of Whistleblower, either the setting has changed entirely or the game is over.

I think, more than anything else, Whistleblower shows us that Red Barrels is keen to learn and develop. That’s a phrase that is often used for someone under-performing but they are already doing very well.

Capturing nuance and innovation are key in horror games and Red Barrels has shown a keenness to refine their work.

All this and more will serve Outlast II well. Early speculation and interviews have indicated a new direction for the game. Their intention is to scare the player directly instead of by proxy via the character. I believe this is the way forward.

These games are largely psychological in nature and interfacing with the player brings this genre’s uniqueness to the fore. For this methodology, irrespective of its success, I applaud Red Barrels.

Whistleblower has been the redeeming feature for Outlast. And coupled with the recently released information, I can hardly wait for the second coming.