Far Cr 4 has struck a balance between keeping some loved mechanics from Far Cry 3 and implementing enough new to keep features to keep things interesting for those who are returning to the series.

You play as Ajay Ghale a native from Kyrat who has returned home to spread his mothers ashes. His arrival stirs the tyrant of Kyrat, Pagan Min a bloodthirsty king who’s only goal is to wreak havoc on the people of Kyrat. As the various demos and trailers show the tyrant is very like Vass from the previous game in many ways, especially the way he goes dancing around bloody corpses. But despite the fact Pagan Min is the one of the most important characters in the game he rarely comes into the game making the story slightly less like a crazy playground for the tyrant and more like a revolution against the locals way of life.

During the first few minutes Ajay Ghale is captured by the radical resistance in the midst a regular raid to try and reclaim Kyrat from Pagan. You are instantly thrown into the games sandbox playground with the single goal to escape, and in the spirit of Far Cry games you fall in with these rebels and they will task you with taking down Pagan. However unlike in the past these rebels seem to have a past with Ajay which definitely adds new story elements to the game. Because of this the game is definitely more logical as it sees you climbing the rebels ranks to one day take the place of your father. 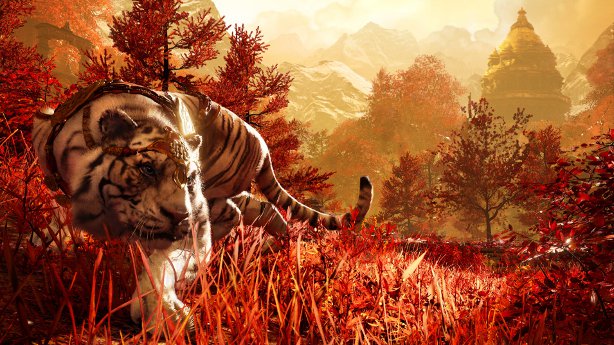 Shangrila is both beautiful and dangerous

As you climb these ranks you will be able to make important choices that control the flow of the war and the story. You can choose the decision that you feel is right or if you dont agree with the resistance the one that seems to benefit them the least. The decisions are already devastatingly difficult to choose but  to add pressure the leader that you denied the help of will confront you and tell you what you have caused making you feel incredibly guilty.

The two immediate leaders are Amita and Sabal, these two will both offer you different choices that vary drastically. For example Sabal is concerned with maintaining Kyrats traditions meaning instead of advancing their civilization they are going back to denying people their rights and executing anyone who stands against them.

Like in the previous games side quests are available and you will likely have to take them on if you want to complete the campaign and the best moments in the game are the new Shangrila missions. These missions consist of taking you to out of reality and tossing you into an unworldly area, these moments will draw you back into the game time and time again. These missions will definitely stay in your mind as you experience intense hostage rescues resulting in you merely escaping the vicious militia.

In multiplayer animals can be your greatest friend or greatest enemies

Despite the fact that the opposing teams vary massively they are surprisingly balanced, this is because the enemy animals are not as durable as they are in the campaign and because of the addition of animals to their team pagan mins troops have less fire power and are usualy based on staying in the shadows.

This installment offers up so much and really builds on the last game whilst still staying true to its roots. Far Cry 4 suits a number of different groups of gamers because of the wide varieties of play styles.

\It also pulls the player in to the point where you will be able to marvel the beautiful wildlife before using your newly found animal friends to wrest an advantage.