I recently ran a session where one of our players couldn’t make it. Being in the middle of a story (The Jewel of Yavin), I didn’t want to advance without this player. As his character was also essential to the team for the race itself (he’s playing their pilot) I decided we could have fun with a filler session.

What follows are my notes and some resources for running ‘The Hangover’ in FFG’s Star Wars RPG: Edge of the Empire. Of course, as a top-tier Dungeon Master you’ll be able to convert some of this for your own games, groups, and goals.

Setting up the Intro

My characters had organised to try to get some of their rival racers drunk or drugged ahead of the race. Some of the characters had been pushing themselves to outfit their cloud car and spending hours to that effect.

This intro may require your players to ‘go along’ with it a bit. I hope your group is comfortable enough to realise this is more of a filler session and that a little railroading could be required.

I narrated the following,

You’ve all been working pretty hard getting the car ready for the big race. Some of you have been making friends with the rival racers. Lowhrick you organised to go out for drinks with your new friend and convinced the team to come along.

I then lifted my drink and motioned my players around the table to do the same. We all clinked glasses and drank.

The scene fades to black…….. Everyone give me a ‘Resilience’ roll.

Lowhrick, you rolled the highest so you wake up first. You’ve got a splitting headache and you wake up face down on a Tan Tauntaun fur rug.

As the characters wake up one by one, describe the lavish yet ruined environment they find themselves in.

Some ideas here that I used:

A Player Character is Missing

As the characters do a check to find if they still have all their items and body parts, advise them which character is missing and what item(s) they have instead. 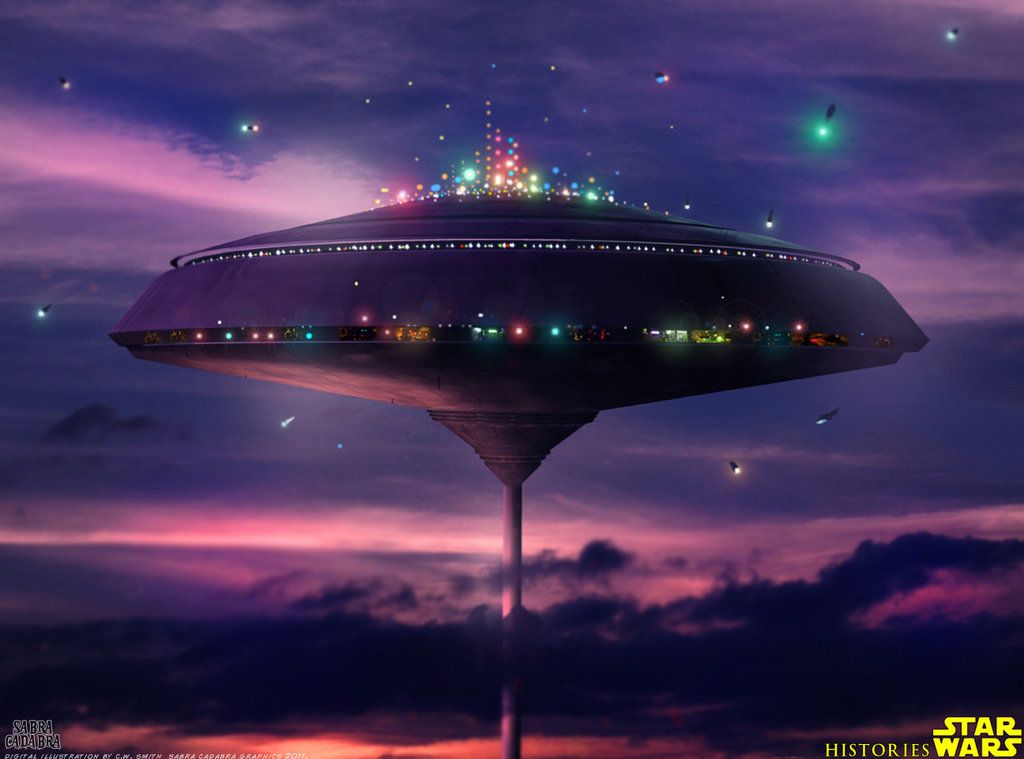 The casino is on an outcropping off Cloud City proper. It’s floating on its own platform, tethered by cables and a narrow bridge.

As you approach and pass through the cloud layer you see lights, Lasers in a multitude of colours. A pot of gold at the end of the rainbow effect.

The players give up their weapons to enter the casino. After describing some of the gambling options (Sabac, Blackjack, Roulette, Boxing). Escort the player characters to a private rooftop garden by guards in suits.

Vorse has footage or a live feed of a humanoid figure that looks like their missing PC with hood on their head tied to a chair. (Maybe being beaten)

Depending on negotiation or roleplay, Vorse can give players 4-8 hours to get him the money. If they don’t pay up, their friend will die and he’ll come for the rest of them.

Players find their way to the safe deposit box. Find a briefcase with 22,000 credits. Plus other story hook items for future sessions. (Napkin with lipstick kiss, phone number. Possibly a photo of them hiding something in the hotel room’s roof)

Here are some ideas that my group used to get you started:

Taking the cash back to the casino mogul gives them the hostage. If they’re late, perhaps the PCs can make some promises or take on some obligation.

(If Session time finished, this can be the missing PC, if you need to stretch it out, it’s another NPC. Maybe story relevant.)

Turns out it’s not the missing PC. It’s an NPC. In my case, (Gerrol Hunn Other Cloud City Racer).

PCs should want to head back to the hotel. If not, encourage by saying NPC left some stuff there.

Back at the hotel

Returning to the hotel room, PCs hear music playing. They run into a burly bodyguard. Lando Carlrissian (Baron of Bespin) is at the piano.

Lando acting cool and friendly (roll die to pick a PC), Punches one and knocks them out.

Players may like to fight back here. I advised them that Lando essentially runs the city they are in, and that they’re here to pull off a heist. Trying to kill Lando may cause quite the problem with that mission.

You may need to come up with different reasons why your players should listen to what he has to say.

Lando’s bodyguard explains the player characters stole Lando’s cat (the Nexu) last night. Lando found them because the missing character left their jacket with hotel key in the tiger cage.

The players must find a way to bring the cat back alive. If needing further incentive, Lando mentions he has video footage from the night before.

Now the players have the challenge of moving a giant angry cat out of the bathroom and safely into some kind a transport to take to Lando’s.

This should involve a number of interesting checks that your players can volunteer.

PCs have to go back to the cop car and find player just now waking up refreshed from inside the boot of the car.

By all accounts our group loved this session. It was light and pretty quick compared to our usual story heavy slog. There was a bit of meta-gaming once the players realised they were in ‘The Hangover’. One player tried to check the roof of the hotel, I countered with a light slap on the wrist of some strain damage (Because they’re up in the clouds).

There’s a bit of a balancing act of making sure the players can earn credits to pay off the Mogul and hotel, without giving them too much opportunity. To curb this there’s the time limit and you can always have casino security escort players out if they’re causing problems or winning too much.

If you end up running this game or have in the past, I’d love to hear about it in the comments below.